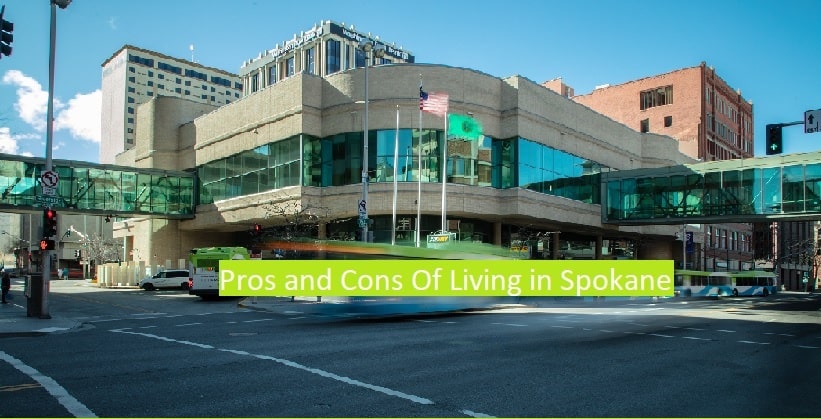 Situated at the heart of Inland Northwest, Spokane is the second-largest city in the state of Washington and it takes pride in its ‘four-weather’ climate and the glorious past. Moving to Spokane, you will be a part of the city that has always embraced new residents with a full heart.

Like every city, there can be pros and cons of moving to Spokane but the merits of the city always overshadow the demerits. Our Spokane moving guide will help you understand the city better.

Let us have a quick look on Spokane City Fact along with the pros and cons of living in Spokane Washington.

The Pros and Cons of Living in Spokane Washington

The Spokane downtown is a dope

Spokane’s downtown is amongst the healthiest in the nation. It was earlier dismissed as a neglected urban environment but not anymore. The downtown is one of the most happening places in the state with plenty of mom-and-pops thriving in an active, walkable, mixed-use, and dynamic urban environment. Moreover, the city also has the presence of several big companies like Apple and Nordstrom.

Do you know how much a house cost in Spokane? Just $300,000 – and do not assume it to be a small one. We are speaking about a house with three beds and two baths. Moving to Spokane, you can accomplish the dream of buying a home without much difficulty.

The weather is always pretty here

Spokane is a ‘four weather’ city and this makes here one of the best destinations to start a new life. The city has nearly 200 days of annual sunshine. It rains less than Seattle here; with only 17 inches per year; well below the national average of 38 inches. Although winters are cool here, averaging a low of about 22 degrees F, it has warm summers. The average temperature is 83 degrees F in July and August.

One of the pros of moving to Spokane is that you won’t spend much time on the roads while travelling to or coming back from the office. The traffic is pretty smooth and slow here and as a result, you get to spend more time to spend at home. I hope my friends from LA, Seattle, and Chicago are listening.

The city is more cosmopolitan

Spokane’s population is more cosmopolitan than most of the cities in Washington. The city’s demographics are changing and it is getting more diverse and more dynamic. The phrase for new people moving to Spokane from Seattle, Portland, San Francisco, and Los Angeles is “Tech Refugees” as they are smart, creative youngsters coming to work at technology-related companies.

For fitness freaks, there are ample trail venues

Are you a fitness freak? You will love Spokane as the city has ample trail and trekking venues. Since Spokane’s trail venues are famous across the country, you will meet up with hundreds of adventure enthusiasts every week here.

Some of the popular trail spots in Spokane are:

5 ski resorts with 1.5-hours of downtown

During winters, Spokane turns into a white snow land. Take a 1.5-drive to one of its 5 ski resorts. One of the biggest pros of moving to Spokane is the abundance of ski resorts. Within just a 1.5-hour driving radius, you will find 5 ski resorts, which is rare for a city the size of Spokane.

Spokane is surrounded by water

Have you ever dreamed of living in a land surrounded by water? Then call Spokane your home. Spokane has a dozen lakes around it, where you can fish, swim, jet ski, and frolic on weekends. Moving to Spokane, I bet your weekends will be spent on the water. And if you can drive for two hours, 100 more lakes are waiting for you.

Can you imagine a waterfall in the middle of the city? Spokane has one. And if you assume it to be a small one, you’re mistaken. Spokane Falls is almost the same size as Niagara. And now tell me; aren’t you excited to move to Spokane?

Spokane’s education is robust in Washington

For those moving to Spokane with the family, here’s great news. The city has plenty of educational institutions, including five universities and two med schools. And altogether, the city has 15,000 students. And this makes Spokane one of the liveliest cities in the state.

The universities in Spokane are:

The best schools in Spokane include:

One of the pros of moving to Spokane is the absence of a state income or inheritance tax. And this has made the city a favorite relocation destination for retired people.

Not just retired people, even the working professionals are benefitted from this tax-friendly nature of Spokane. Being tax-friendly, Spokane creates more jobs, stopping young and educated workers from moving to other cities.

The cost of living in Spokane is pretty low

While thinking about relocating to a new city, what bothers us is the cost of living. But moving to Spokane, you don’t need to worry about it. The cost of living here is low than in many other neighboring cities. It is 4% lower than the national average.

Health care is cheaper in Spokane and the same is the case with gas and groceries. And even public transport is more affordable than in other cities in Washington State.

No tornadoes and no hurricanes here in Spokane

Spokane is a blessed land free from natural disasters like tornadoes and hurricanes. Even earthquakes do not occur in Spokane. Occasional flash floods from heavy rain may disrupt normal life but do not cause serious damage.

On a weekend, you can visit one of the many museums in Spokane that display items and artifacts related to history, arts, and science.

Some of the museums in Spokane are:

So is Spokane a perfect destination or it also has its demerits?

The crime rate is too high here

Before moving to Spokane, you need to understand that city records a high crime rate, which is 165% higher than the national average. Living here, you have a 1 in 16 chance of becoming a victim of crime. However, the records prove that the crime has reduced by 16% over the last year.

One of the biggest cons of moving to Spokane is air quality. Spokane ranks among the worst cities in the US for air pollution due to forest fire and man-made climatic changes.

Your decision to move to Spokane is a wise one as the city is growing, offering large job opportunities. The city’s climate is amazing and there are also several outdoor recreational activities to engage in. Yes, like any city moving to Spokane also has pros and cons and the high crime rate along with polluted air are big drawbacks of the city. But since it also promises a better standard of living, I will suggest you seriously think about relocating to Spokane, Washington.