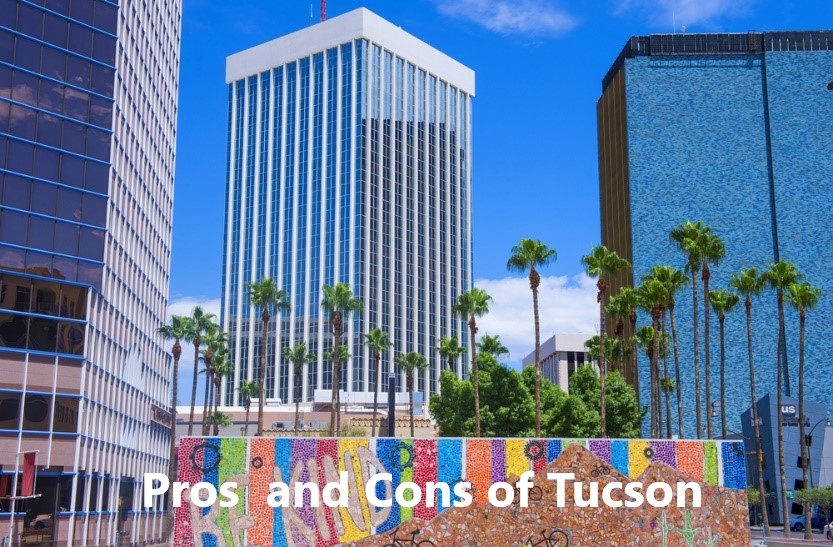 Guest ranches, horseback rides, and cattle drive – Tucson still has the Old West roots intact in it. Located in a valley of the Sonoran Desert, the city in Arizona takes pride in its dramatic beauty. And there are several pros and cons of living in Tucson. Surrounded by mountain ranges, moving to Tucson, it will take you by a surprise if you are expecting a ‘desert city’.

Though Tucson is just a two-hour drive away from Phoenix, the capital of Arizona, do not expect the same stuff here. Instead, the city is amazingly different. And maybe that’s the reason moving to Tucson is a great decision for you and the family.

Blessed with natural beauty, Tucson, witnesses a large migration of population from all the parts of the USA. It’s not just the legendary year-round sunshine and saguaro-and-sunset landscape that has been alluring Americans to Tucson but there are more. To help you know more about the city, its lifestyle, culture, job opportunities, and other factors that impact your life, we have created a comprehensive moving guide on Tucson. We hope this help you know the pros and cons of living in Tucson.

Founded as a military fort by Spanish in 1775, Tucson became a part of the USA in 1853 when it acquired Arizona. The Spanish past is still visible here and the city is sometimes referred to as ‘The Old Pueblo’

The climate in Tucson is hot semi-arid with two major seasons, a hot summer and mild winter. In summers, the day time temperature crosses 100 °F and overnight temperatures between 66 and 85 °F. The winter is mild relative to other parts of the US. The daytime highs range between 64 and 75 °F with overnight lows between 30 and 44 °F.

Let us see the Pros and cons of Living in Tucson

Pros of Living in Tucson

It is the Mountains in Every Direction

Plenty of Sunshine throughout the Year

Tucson is famous for its sunny days. With 286+ glorious days of sunshine, every morning you wake up to find blue skies and glimmering sunbeams through the window. Those who don’t find snow and chilly morning exciting should seriously think about moving to Tucson.

Sunsets are Legendary in Tucson

Nothing can beat the jaw-dropping sunsets of Tucson. Imagine a life where you spend evenings catching up cotton candy pinks, bleached oranges, vivid purples, and dappled clouds in surreal shapes over a beer. This is what Tucson promises you.

With 128 parks and 22 recreational centers, Tucson offers a vibrant life to its citizens. Cyclers, joggers, and nature lovers will have a great time here. Some other amazing outdoor activities include hiking, sightseeing, and horseback riding.

Some of the national parks in Tucson to explore are:

The Country’s Best Air is in Tucson

One of the pros of living Tucson is its air quality. Traditionally, Tucson’s air has been the best in the US. It has been ranked as the cleanest metropolitan area in the country for 24-hour particle pollution by the American Lung Association in 2013.

You Will See Bikers All Around Here

Moving to Tucson, do not be surprised when you see bikers flooding the city streets on most weekday mornings and weekends. It’s not just the streets, but even at natural parks and trailing areas, you will find hundreds of cyclists gliding passionately. The city is a sought after destination of bikers and it stood 7th among the ‘10 Best Cities in the U.S. For People Who Love to Ride’ by Bustle in 2014. Tucson was also honored as the ‘Best Road Biking City’ by Outdoor magazine in 2010.

The Nightlife is Vibrant and Ravishing Here

The after-dark hours in Tucson are vibrant with wine bars to raunchy comedy shows. With bars and clubs open till 2 AM, the city has something for everyone. For those with a soft spot for western-style havens, there are cowboy-themed restaurants.

The Cost of Living is Reasonable Here

Tucson is a city with a low cost of living. If you have a decent income, you can lead a good life here. As per studies, a four-member family can survive in Tucson with $3,000 a month. When it comes to renting, apartments tend to range from $800 to $1,300, but that depends upon where you live.

The Job Market is Robust Here

The city’s economy is booming and youngsters have a wide range of job opportunities here. The University of Arizona is one of the largest job providers in Tucson. This is followed by defense contractor Raytheon, and the Davis-Monthan Air Force Base. Apart from that, different sectors that offer a job in Tucson are leisure and hospitality. Some of the big companies with a presence in Tucson are:

You Will Find Some of the Best Neighborhoods in Arizona Here

The neighborhoods are diverse and ever-changing in Tucson. People are always friendly, helpful, and generous here. Though certain studies state that Tucson’s crime rate is higher in Arizona, it is much lesser than other cities of the US. Similarly, crimes are mostly reported in downtown or outside residential areas.

Some of the popular neighborhoods in Arizona are:

No Serious Natural Disasters in Tucson

There are no natural disasters to worry about in Tucson. The city never experiences tornados, earthquakes, blizzards, or hurricanes. The worst is flooding in low-lying areas after the summer thunderstorms.

This is a UNESCO City of Gastronomy

In 2015, Tucson was designated as a UNESCO City of Gastronomy and perhaps its food scene, which is greatly influenced by Mexican, is the best in the US. Though there is an abundance of Mexican fare in the city’s food scene, do not assume that Tucson’s culinary space is just limited to Mexico. There are also charming bistros, neighborhood cafes, and Southwestern style comfort food to satisfy your taste buds here.

Education Sector is Robust in Tucson

If you are moving to Tucson with family, you will never regret your decision as the average student-to-teacher ratio here is 18:1. This ensures that your child will get proper care and attention at the school. There are public, private, and charter schools in Tucson offering a holistic and stimulating academic experience.

Some of the best schools in Tucson are:

Till now, we were discussing the pros of living in Tucson, and let us focus on its cons.

So what are the major cons of living in Tucson?

Though winters are mild and fabulous in Tucson, its summers are extreme. And the humidity makes it hotter inside the home. In summer afternoons, you cannot even step out of the home as it can be dangerous. Once you move out, sunscreen and hat become your trusted partners.

If someone tells you that swamp coolers will work at home, don’t trust him. Coolers may work fine in April and May but once monsoon hits and humidity rises; a cooler is of no good. You keep pumping water to it but with no effect. You need to have an AC at home to stay alive in summer.

Everyone Here Get Valley Fever

Moving to Tucson, you realize that valley fever is something that is not that simple. It affects both humans and pets and the results can be lethal. The symptoms get visible at an early stage itself and can be detected by a blood test. As treatments are now available, you need to rush to the doctor as soon as possible.

Harmful Reptiles Can Scare You at Anytime

One of the major cons of living in Tucson is the presence of reptiles. You will find them anywhere anytime. Some of them like black widows are lethal and can even cause death. Tarantulas are also common here but don’t touch them as they are venomous. If reptiles scare you, think twice before moving to Tucson.

Tucson is an ideal place to live with your family. There can be certain drawbacks, but the merits of the city overshadow them. With plenty of open trails, clean air, education institutions, and entertainment options, you should seriously think of moving to Tucson