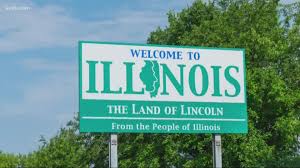 Big cities, attractive towns, historic monuments with glorious and rich past, vast farmlands, wetlands, rivers, lakes – Illinois is nothing but a unique destination to start a new leaf in your life. Situated in the Midwestern and Great Lakes regions of the United States, Illinois is one of the richest states in the US and is also a microcosm of the country. And ‘is moving to Illinois right for you in 2021’ is the point that we are gonna discuss here.

Illinois is better known for Chicago, the cultural heart of the US, but the state is more than that. It had always been a bellwether both in social and cultural terms and, through the 1980s, in politics. Three Presidents – Abraham Lincoln, Ulysses S. Grant, and Barack Obama – were from Illinois.

Let’s delve deep into the DNA of Illinois to know the state better. This will help you to decide whether you should pack the belongings to move to Illinois this year.

What is the climate in Illinois?

In summers, the average high touches the low 80s with occasional extreme temperatures during a heatwave.

Winters are cold, with ice storms and invasion of cold waves. During this time, the average reaches just above freezing temperatures and can often drop below 10°F. And the heavy cold wind will make the days more chilling. Snowfall ranges from an annual 14″ (355.6mm) in the south to 38″ (965.2mm) in the north. Snow covers the ground in the winter, while blizzards amass large quantities

Illinois registers an annual average of 32″ (812.8mm) of rainfall in the northern part, which gradually increases to 48″ (1219.2mm) in the southernmost tip of the state.

Illinois receives an average of 2,500 hours of sunlight over the year.

How is the economy in Illinois?

Illinois has the 5th largest GDP in the US and it is one of the most diversified economies in the world. Fueled by the economy of Chicago, Illinois is a major economic center and home to some of the largest companies in the world.

About 36 Fortune 500 companies are headquartered in Illinois and for six consecutive years, Chicagoland was ranked the nation’s top metropolitan area for corporate relocations. Chicago is also home to the largest futures exchange in the world, the Chicago Mercantile Exchange.

Some of the big companies having offices, manufacturing units, or headquarters in Illinois include:

How are the job opportunities in Illinois?

Since Illinois is a hub of economic activities, there’s no shortage of jobs here. The unemployment rate in Illinois is comparatively lesser than in the neighboring states. It’s just 4.8%, which is continuously declining in the past decade. And moving to Illinois, what’s going to bring a smile to your face is that the government will soon raise the minimum wage to $15 per hour, one of the highest in the US.

Some of the jobs in high demand are:

What is the cost of living in Illinois?

Despite being highly rich and better job opportunities complemented with a thick paycheque, the cost of living in Illinois is reasonable. It stands 21st among the US states with a cost of living index of 94.5. The cost here is below the national average in housing, groceries, and healthcare.

10 cheapest places to live in Illinois

Can I afford a home in Illinois?

You don’t need to win a lottery to buy a home in Illinois. Even taking a home on rent is much cheaper here. The median home value here is under $185,000.

This is not just limited to small towns or cities but applies to Chicago as well. Moving to Illinois, you will be surprised to note that even in Chicago, the property prices are much lower than in New York City, Los Angeles, or Washington DC.

Some of the best cities to buy a home in Illinois in 2021 are:

Which are the best neighborhoods in Illinois?

Moving to Illinois, your primary aim will be to find a good home, either to own or on rent. And it’s natural to have queries related to the best neighborhoods here. Do not worry, as there are plenty among them.

With a fabulous food scene, a vibrant arts community, hundreds of parks, and notable landmarks, the neighborhoods in Illinois have something for everyone.

Here is the list of the best neighborhoods in Illinois

How are taxes in Illinois?

While discussing the pros and cons of living in Illinois, we need to talk about taxes here. Illinois perhaps has the highest property tax in the US, with a statewide average tax rate of about 2.31percent. This is nearly double the national average of 1.21percent. Moving to Illinois, you end up paying an average of approximately $4,157 annually. Only New Jersey has higher property taxes than Illinois in the country.

Illinois is not a tax-free state and the tax policies here are generally a mixed bag of positives and negatives. There are several tax-related pros and cons while living in Illinois but for retirees, the system is stunning.

Senior citizens (residents above 65 years of age) enjoy tax exemptions. It exempts almost all retirement income from taxes. Tax-free retirement income includes Social Security benefits, military benefits, public and private pensions, and retirement savings accounts such as a 401(k) or IRA. There are also several other benefits for senior people here and it is no surprise that Illinois is their perfect home.

Can I get the best health care in Illinois?

As per a study by the United Health Foundation, Illinois stands 30th in health care based on trends in obesity, smoking, diabetes, and physical inactivity. Almost 89% of the residents in Illinois are medically insured and the average cost of personal health spending per capita here is $6,756, which is lesser than the national average.

And if you are worried about the medical expenses, all Illinois residents between 19 and 64 years of age, who are US citizens and have monthly income less than $1,366 for an individual or $1,845 for a couple will receive medical coverage through Illinois Medicaid. This makes Illinois medical system one of the best in the country.

Some of the best hospitals in Illinois include:

How about the education system in Illinois?

Moving to Illinois with your family, you don’t need to worry about quality education as the state has ample education centers including some of the best colleges in the US.

Some of the best schools in Illinois include:

Top 10 colleges in Illinois include:

Is the crime rate extremely high in Illinois?

The crime rate in Illinois is slightly higher than the national average and 16% of the crimes reported here are violent. 23% of the crimes are related to property and about 47% of the people are concerned about crimes here in 2021, which is 6% less than last year.

Facts about crime in Illinois

The safest cities in Illinois are:

Are there places that I should skip while moving to Illinois?

Illinois might have some of the best cornfields, wineries, and outdoor locations. But it also has its share of places where you should avoid relocating. Every town or community in Illinois has its pros and cons of living.

We have filtered out a few among them that you should skip living.

What are the pros and cons of moving to Illinois?

Illinois is one of the best destinations to start a new life. But we need to agree that like any other state in the US, there are pros and cons of living in Illinois. Let’s have a look at some of the pros and cons.

What are the attractions in Illinois?

Moving to Illinois, it is a promise that you won’t be bored. There’s no shortage of activities to do and places to visit in the state. From historic monuments and cultural events to breathtaking Chicago architecture and fun activities, Illinois has something for everyone.

Why Illinois is the best place to settle after retirement?

Illinois is one of the most sought-after states in the US for retirees. It’s not just the scenic and breathtaking landscapes of Illinois that tempt them to call the state their home, but there are various other reasons. Of course, the infrastructure is impressive and there are several retreats and attractions to keep you engaged in old age. But it is the tax benefits that draw hundreds of retirees to Illinois every year.

Illinois is not a tax-free state and the tax policies here are generally a mixed bag of positives and negatives. There are several tax-related pros and cons while living in Illinois but for retirees, the system is stunning.

It exempts almost all retirement income from taxes. Tax-free retirement income includes Social Security benefits, military benefits, public and private pensions, and retirement savings accounts such as a 401(k) or IRA. There are also several other benefits for senior people here and it is no surprise that Illinois is their perfect home.

There can be pros of cons of living in Illinois. But we can confidently state that no state like Illinois promises a combo of a good job, high lifestyle, extremely marvelous scenic surroundings, and perfect housing. And if you agree with this, you can start calling Illinois your home.